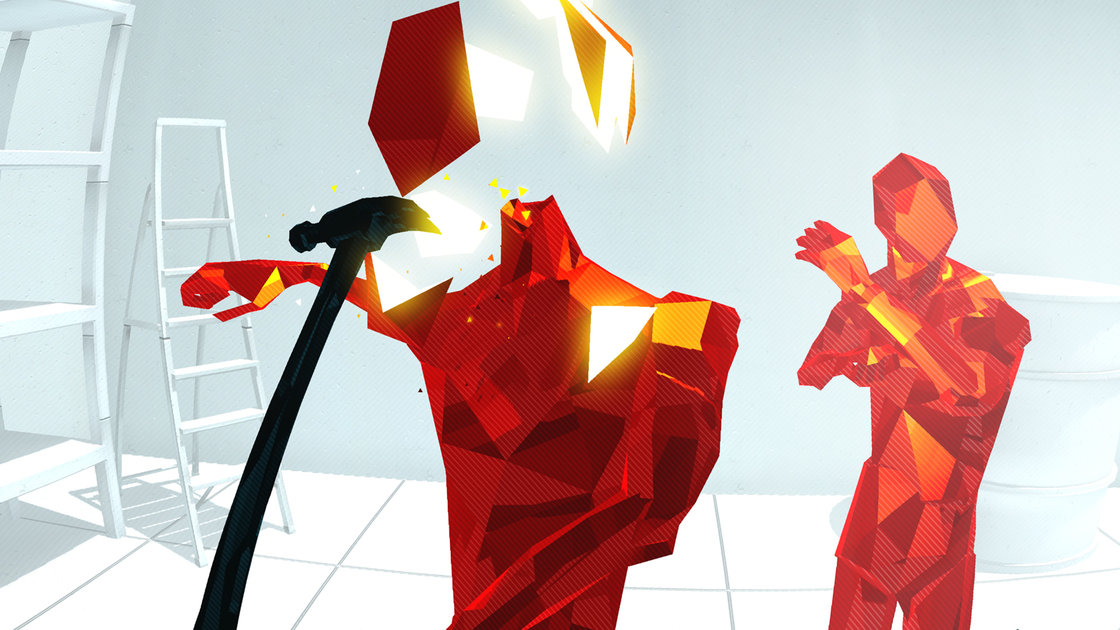 Since the days of Max Payne – which was the first game to feature bullet time, the Matrix-style super slow-mo action – a multitude of other games designers have tried to a create a gaming delight by including the mechanic in their game somehow. But often such games have just felt like a bolt-on or an unnecessary and unimaginative clichéd addition.

Superhot VR, however, breathes new life into bullet time by putting a fresh spin on it. Time is essentially at a standstill until you start to move, then everything speeds up and the threats become real-time, which makes for a thrilling take on a classic gaming style.

Playing this way in virtual reality feels unnatural, confusing and extremely challenging – but that’s exactly what makes Superhot VR so fantastic and why the game is the most frustratingly enjoyable that we’ve played in VR to date.

Having a smashing time in slow motion

Superhot VR places you in a world full of angry glass men intent on killing you. You have to punch, shoot, stab and smash your way to victory as you fight for your life.

The twist, of course, is that moving makes your enemies move too. And the faster you move, the faster they move. This means that if there are multiple enemies shooting at you, their bullets come in more quickly as you shoot back. Turn your head to assess where they are and you’re met with a hail of incoming rounds.

You soon learn that the trick is to use small, slow movements to ensure time moves slowly. Move like you’re doing Tai Chi. That gives you the chance to see incoming shots and be able to dodge them. Cue feeling like Neo from The Matrix – dodging bullets as they zip by, ducking punches, bending and twisting to some burbling bassline theme-tune.

There’s nothing quite like grabbing a falling gun out of mid-air and downing multiple enemies with it. Problem is, however, the result of doing this is usually moving too quickly then dying. Over and over again.

Each level is broken down into multiple sections. Complete one without getting hit and you can progress to the next section. Fail and you’re back to the start, ready to do it all again.

We found it actually pays to fail because then you learn each section and how best to quickly complete it. We also found new fun ways to complete each section when we had a chance to replay.

There’s typically five sections or more per level. Which doesn’t seem like many, but the game can last an age if you end up dying a lot and having to complete the same sections over and over again.

Each section of the game presents a new and unknown environment. You need to quickly look around to see what the threats are and what weapons, if any, you have to deal with them. Of course, looking around is counted as movement, so even a glance can be enough to increase the danger.

This will soon lead to you carrying out ninja moves, like uppercutting a close enemy and then grabbing his gun as it flies through the air to quickly shoot his comrades while also dodging the bullets streaming towards you.

We also found we would end up doing clever stuff like throwing guns through the air on purpose, so when the game switches section we could catch them again and shoot our way to victory. This is particularly handy if you find yourself in a hard place in the next section, but if the guns hit the floor then they break and shatter – so timing is everything.

Enemies are hilariously easy to kill in Superhot VR. They break like glass, so throwing a bottle at them, for example, is sufficient enough to take them down.

Objects such as bottles are scattered around each level that can be acquired and used, including bottles, cameras, ashtrays, knives, throwing stars. These objects are also capable of deflecting shots (as are your guns), but dodging is far easier and more practical.

Sometimes when unarmed, you have to purposely move to push time on, to see where the enemy is going and force them to come within striking distance. We soon found we were spinning a hand in mid-air like we were trying to fast-forward the game rather than shuffling around on our feet.

With the power to control time like this, you feel somewhat super-human, with the ability to influence the world around you with the simple flick of a wrist.

This style of bullet time design also gives you time to breathe and contemplate each and every move, unlike other games. That is, of course, if you can break the habit of wanting to go guns blazing as soon as you get a chance.

When we started with Superhot VR, we quickly realised just how limited ammo was. Each gun you come across only has one clip worth of bullets and you have to make sure your shot is on target too – so shooting where they’re going to be, not where they are is essential.

Shooting also has to account for speed of movement. If you fire multiple bullets then it leads to a quick burst of time, which makes things more hectic.

Many sections within levels start without a weapon of any sort and you have to punch your way out of danger. Uppercuts, left hooks and plenty of ducking and diving are the key to winning.

For the briefest time, we though Superhot VR might have been a boxing simulator (and one heck of a cardio workout). But no, the action is well mixed between sections: one minute you’re punching multiple enemies in the face, the next you’re duel-wielding sub-machine guns and blasting your way to victory.

Later on in the game, you also unlock the ability to destroy enemies by some sort of telekinetic power. It takes a while to work and movement is quick during that period – so you’re in danger if you can’t dodge.

A painful breaking sound occurs whenever you get shot or hit. We’ve learnt to hate that sound, as every time we heard it, it meant starting over again from the beginning. A crushing disappointment at our lack of skills, but a lesson in just how tough this game can be. The challenge and replaying the levels actually kept us playing on and trying to perfect the way we played rather than throwing the controllers away in frustration.  Well, most of the time.

Once the campaign is complete you have the option of playing new challenges that include hardcore mode, headshots only, never-ending waves, levels where you’re not allowed to die, and more. One of these challenges saw us thrust into an environment where we had to kill 100 enemies without dying – which, clue, was far from easy. These extra challenges are tough and will keep you playing for hours and hours.

Surprisingly, Superhot VR is a standing-only game in terms of required Vive play space. You can move about in the world, but you don’t really need to as you can stand in roughly the same spot and just dodge or wait for the enemies to come closer.

We did find we were swinging around a lot and ducking and dodging during gameplay. So it’s worth making sure you have enough room outside of mere standing space. As a result, Superhot VR is a sweat-inducing, tiring game that requires lots of movement. It seems that “Superhot” is not just the name, of the game, it’s also the resulting disposition.

One downside we did experience was a problem with hitbox tracking. Sometimes we could have been sure we’d dodged an incoming shot, but it still hit and killed us. When you can see the trace of the bullet coming in, you can see where the shot is going and where it’s been. So when it hits you when you’re pretty sure it shouldn’t, it’s rather frustrating. It’s not a game-breaking problem, though, so we simply dodged further out of the way each repeat time.

Superhot VR is a simply brilliant gaming experience. It’s tough, frustrating and exhausting, but we kept playing and didn’t want to stop.

The movement-based motion speed mechanics of bullet time are jarring at first, because it goes against the grain, but that’s also the highlight here; it’s the point that sells this game as different and exciting.

Smashing your way to victory is a thrilling feeling, especially when you master movement and turn from human being into a bullet-dodging, cage-fighting super ninja.

Originally published in October 2017, updated to include new platforms.