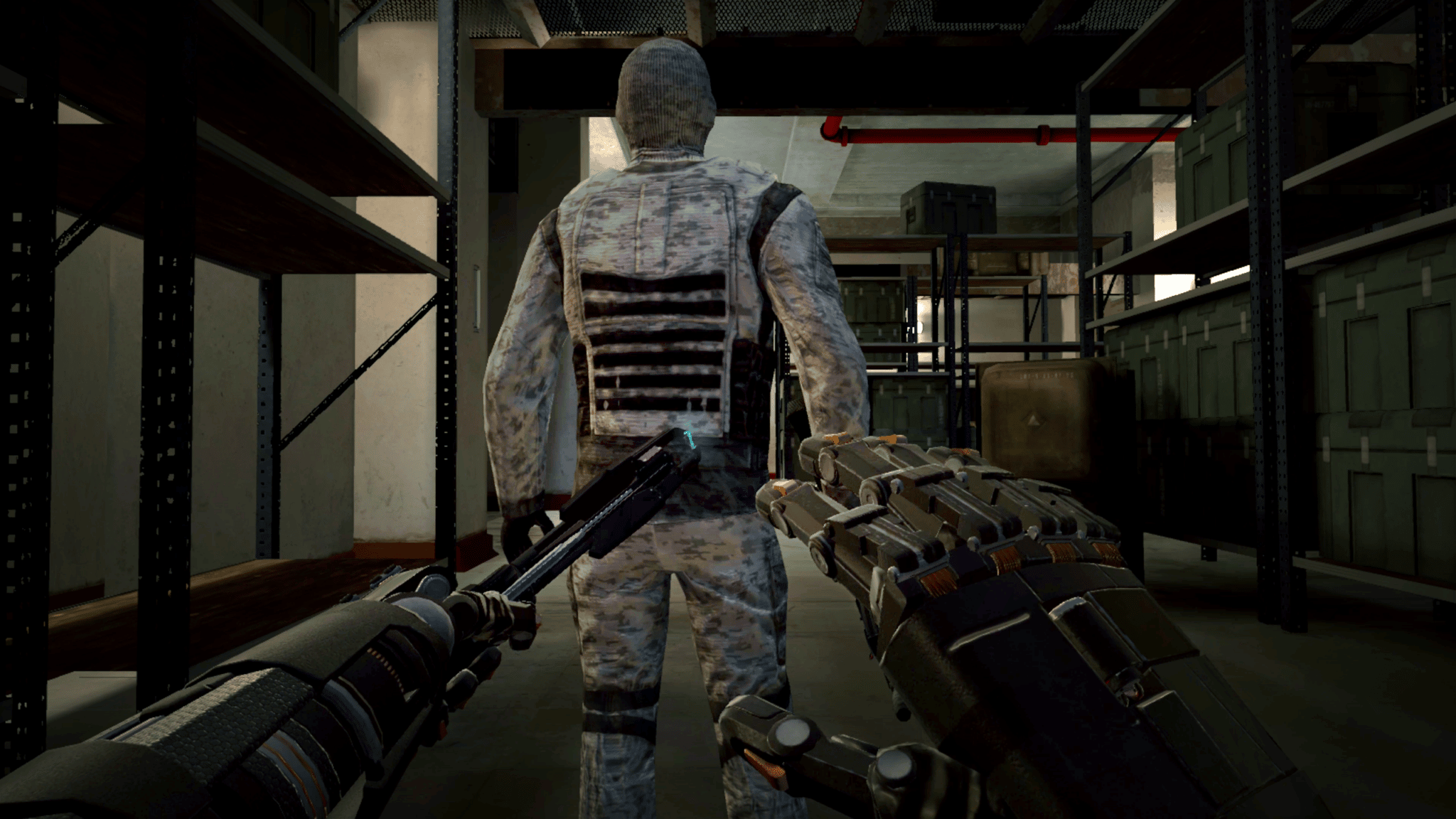 Setting Up The Stealth

Much like the first game, there’s a short single player campaign that lasts about five or six hours split across seven missions, all of which are replayable once completed. However, Espire 2 also offers a co-op multiplayer mode, using re-purposed maps from Espire 1 to present a mini-campaign with four missions that narratively bridge the gap between the Espire 1 and the sequel.

In this review, we’re focusing on the core mechanics of Espire 2 and its single player campaign. However, as we noted in our multiplayer preview last month, you’ll have access to the same tools, abilities and mechanics in multiplayer, just with two operatives running around instead of one. Besides the addition of a second player, the stealth gameplay in both modes is fundamentally the same. It’s also worth noting that you’ll need a friend to play multiplayer with – there’s no online matchmaking to find you a co-op partner automatically.

Regardless of which mode you’re playing, Espire 2 gives players a startling number of options. Whether you’re playing a mission for the first or third time, the design of the game’s systems and levels gives you access to many creative avenues, allowing you to fully control your approach and execute a plan of your own making. This freedom is the beating heart of the game – there’s never a right or wrong approach to any given scenario.

Many of the core Espire 1 mechanics carry over into the sequel. Espire vision is one example, activated by holding your hand up beside your head and pressing the trigger button. This will allow you see through walls, clarify (and mark) the position of enemies, as well as identify key objects in the environment. Likewise, Espire 1’s climbing system returns, which lets you climb up any metal object and opens up some creative traversal options.

These are all features built into the robotic Espire units, which you possess and control through the entire game, acting as a meta explanation for your in-game UI and heads-up display. If you die, you simply possess another unit from a nearby checkpoint and pick up where you left off.

However, in Espire 2 there are now two types of Espire units – or “frames” – to choose from, each with its own unique abilities and physical attributes that alter your approach and available options. Sinder is the familiar figure from Espire 1 and the default frame that you start the campaign with. A perfect all-rounder, Sinder can use tranquilizer darts and wrist-mounted cameras for a sneaky pacifist approach or wield large automatic weapons to make a scene. The second frame, Sooty, is physically much smaller, meaning you won’t be able to handle large weapons or take nearly as much damage as Sinder. If you’re looking for an all-out stealth approach though, Sooty is much better at sneaking around undetected and redirecting enemies. He can shoot a deployable noisemaker around the map, for example, from which he can issue commands to distract or reroute enemies.

After introducing you to both Sinder and Sooty early in the campaign, the choice is all yours. Every mission can be played (or replayed) with either Sinder or Sooty, with missions designed to accommodate for both. You’ll play through the exact same map either way, but the available options and routes will change. Some areas and items are accessible to Sooty but not Sinder, and vice versa.

The addition of a second type of Espire unit immediately adds a fair amount of replayability to each mission, but Espire 2 also ranks your performance on each mission in various ways that should give committed players reason to perfect their gameplay. You’ll be ranked on your time and budget at the end of each mission, alongside receiving an overall 5-star score. It’s not easy to achieve a 5-star rating either – your lethality, number of deaths and whether you remain undetected will all factor in. That being said, if you’d prefer to play recklessly and go for a lethal approach, the resulting low score won’t punish your overall progress through the campaign. The scoring system is there for the players who want it, but won’t get in the way of those who don’t.

For true completionists, there’s also five badges to unlock for each mission, granted for achievements like remaining fully undetected or taking a pacifist approach across an entire mission. Likewise, there’s cheats to unlock (which essentially act as mission modifiers when enabled) and weapons to collect as well. The latter are unlocked across the campaign, by carrying a given weapon to the very end of a level, after which it can be used in any mission as part of your loadout.

The seven single player missions offer a good amount of variety in gameplay, ranging from classic stealth missions to escort missions, short platforming sequences and boss battles. The environments are well designed and clever in their layout, if a little aesthetically bland at times. Likewise, the narrative was more engaging than I expected, but still not a huge highlight. The voice acting varies in quality, as do the NPC animations in the cutscenes between missions. It’s all of these areas – everything outside the core stealth gameplay – where Espire 2 falls a little short.

Espire 2 uses an upgraded version of the Comfort Theatre feature from the first game, which is essentially an immersive form of vignette that grounds the player in a virtual room while moving, limiting the field of view. The feature can be enabled or disabled, with three further options to adjust its strength when enabled. While it’s a very effective way of reducing nausea, it’s also quite distracting at times and adds a lot of visual clutter to the game’s presentation, particularly in dark environments or during intense action sequences.

Despite that, this and other available comfort options should make Espire 2 a fairly comfortable game for most players when the right settings are enabled. There’s no option for teleport movement, so the comfort theatre is highly recommended for those prone to nausea.