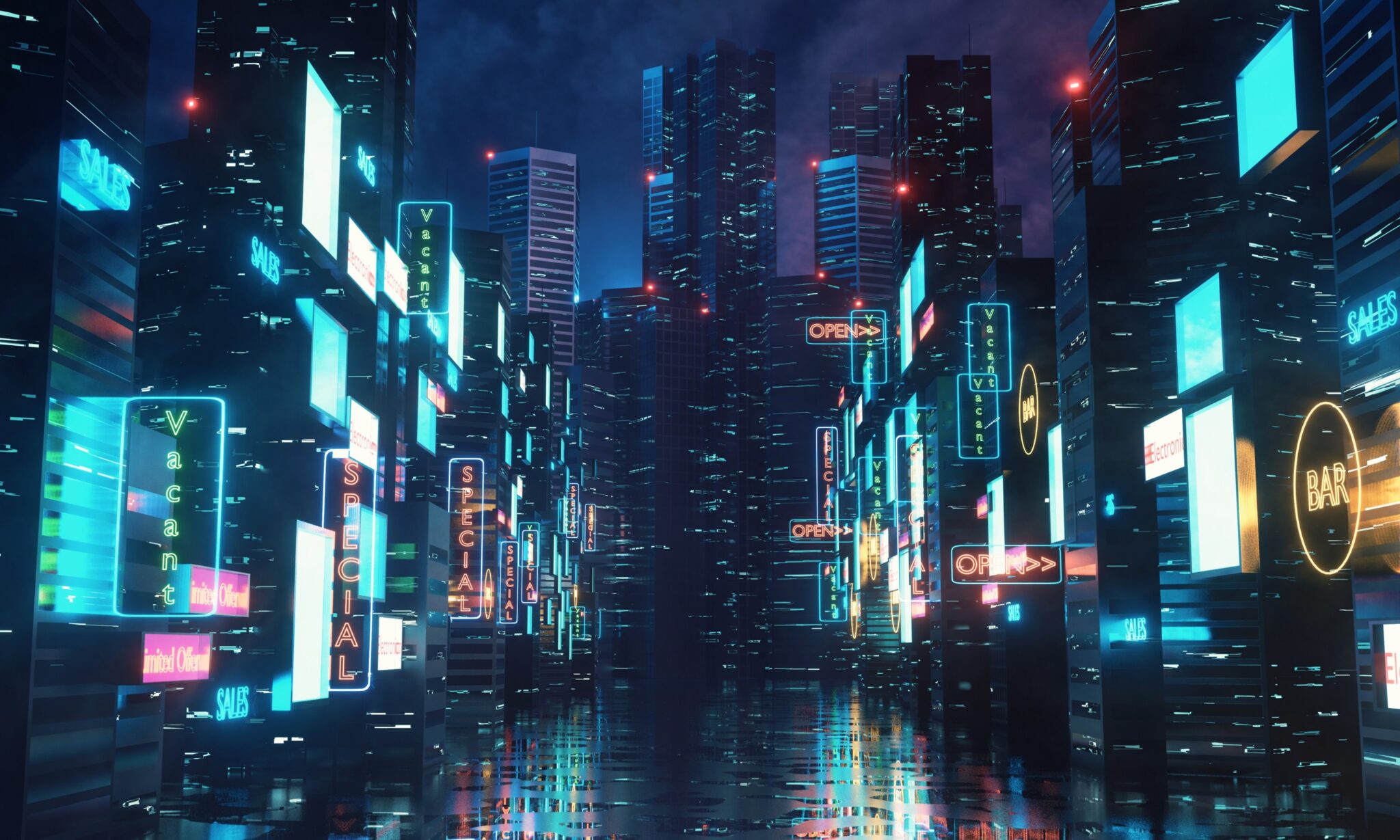 Picture the scene, a sprawling cityscape dominated by skyscrapers stretching beyond the clouds, busy streets filled with people going about their everyday lives all beautifully lit by the warm glow of a summer sunset. Seems idyllic doesn’t it? But it isn’t real, merely a digital construct of a creators mind who envisions a utopian world without the pitfalls of the real one. You’ve seen it in films, read about it in books or explored one in a videogame, a metaverse where anything is possible.

However, in popular media how often have these virtual worlds descended into chaos, never living up to that dream of a virtual realm devoid of discrimination, hate and violence? More often than not the narrative paints a surprisingly factual image of why a particular society has crumbled and turned into a dystopian metropolis involving police states and oppressive regimes that wish to control every image you see and every thought you have.

That may seem a little dark in comparison to what’s available at the moment but there’s no telling where this new digital journey will take us.

If there’s any hesitation in metaverse adoption then it stems not from science fiction but the companies and creators jostling to make this a tangible reality. Meta – formerly known as Facebook – and its CEO Mark Zuckerberg has become the most vocal when it comes to the metaverse. Heck, he even changed the company name to reflect this new position. Alas, Facebook’s history isn’t one of a benevolent social network, continually shrouded in controversy thanks to whistleblowers, how it handles advertising, its effect on young people through platforms like Instagram and so much more.

Even without Meta’s potted history, its current immersive offerings are anything but cohesive. Under the Horizon branding Meta currently has three separate social virtual reality (VR) apps, Horizon Worlds, Horizon Venues and Horizon Workrooms, none of which actually work together. Horizon Worlds is the most ‘metaverse’ oriented of the three where you can build your own virtual realm; a space for you and your friends to play mini-games or a world open to all. Horizon Workrooms focuses on workplace collaboration, where you can share your PC screen and have fully realised meetings in VR. Whereas Horizon Venues provides access to live and recorded events. Yet none of these currently interlink making for a convoluted system.

But that is very much the state of the “metaverse” at the moment. Described almost like a singular entity, in actuality, the current climate is plural with the likes of Somnium Space, The Sandbox, Decentraland and many more trying to carve out their own little corner. So competition is fierce when trying to attract new users and then retaining them, utilising techniques like buying your own slice of virtual land or special NFTs using cryptocurrencies, hosting unique events or teaming up with brands and global personalities.

These smaller metaverse platforms are trying innovative ways to connect with users who sit on the cutting edge of technology, having decentralised ecosystems that don’t suffer the same sluggish nature that bog down the huge tech giants. Yet it is behemoths such as Meta that’ll provide the most mainstream push forward due to their deep financial pockets, mostly funded by advertising.

And that brings us back around to the metaverse nobody wants. One continually recycling billboard that sucks in your data at one end and spews out another targeted ad, ruining the whole experience for everyone.

Advertising does have its place when integrated into the experience to help fund creators. Yet there’s a fine line between that and invasive ad placement continually telling you how your life could be so much better with this one product; nobody wants that. There’s already been pushback when Meta had a go at testing VR ads in PvP shooter Blaston. Developer Resolution Games quickly reversed the decision due to community backlash.

But people also like free stuff. So if you want free access to these new worlds companies need to make money in other ways, ads are inevitably the go-to product. Or there are avenues companies and creators can explore once you’re inside, such as customisation options for your virtual self, all of which can be bought and sold quickly and easily.

To give you an idea of what all of this will be worth – hence the exponential push – a recent research report by Market Research Future (MRFR) found that the metaverse market was worth $21.91 billion USD in 2020 and is projected to grow at a CAGR of 41.7% from 2021 to 2030. So there’s a lot of money to be made in the coming years.

Of greater concern is the ability to create safe secure worlds where everyone is free to explore these virtual realms without the fear of attack or having their data stolen.

If you’ve already tried apps like Horizon Worlds, VRChat or The Museum of Other Realities you’ll have noticed these places employ several methods to ensure users can avoid harassment, namely, creating a protective bubble. Rather than someone shouting at you from across a crowded room they have to be in close proximity before a conversation can be accepted. Should you find the other person disagreeable you can then exit the conversation or even block them entirely. All useful stepping stones towards a more hospitable environment.

Engaging in a particular platform may come down to the brand itself and whether you trust it. Where would you put companies like Epic Games, Meta, Apple, Google and Microsoft on a trust scale? Some probably not very high at all, especially when it comes to your data.

“Interoperability, open standards, privacy, and safety need to be built into the metaverse from day one,” Zuckerberg said during Connect 2021. “And with all the novel technologies that are being developed, everyone who’s building for the metaverse should be focused on building responsibly from the beginning.”

However, voicing his concerns Dr Marcus Carter, an expert in Digital Cultures at the University of Sydney said: “Facebook’s VR push is about data, not gaming. Metaverse technologies like VR and AR are perhaps the most data-extractive digital sensors we’re likely to invite into our homes in the next decade.”

So does a virtual wonderland await?

There’s no reason why it can’t, there are just a few hurdles in the way first. A lot of the social platforms already available show plenty of promise, whether that’s purely for gaming purposes, socialising, meeting up with like-minded groups, watching a concert or getting creative to earn some extra cash.

How well these places are governed and trusted will be far more essential for their future rather than the latest celebrity endorsement.

Home » Metaverse » (VRfun18) Is the Metaverse the Virtual Promised Land?