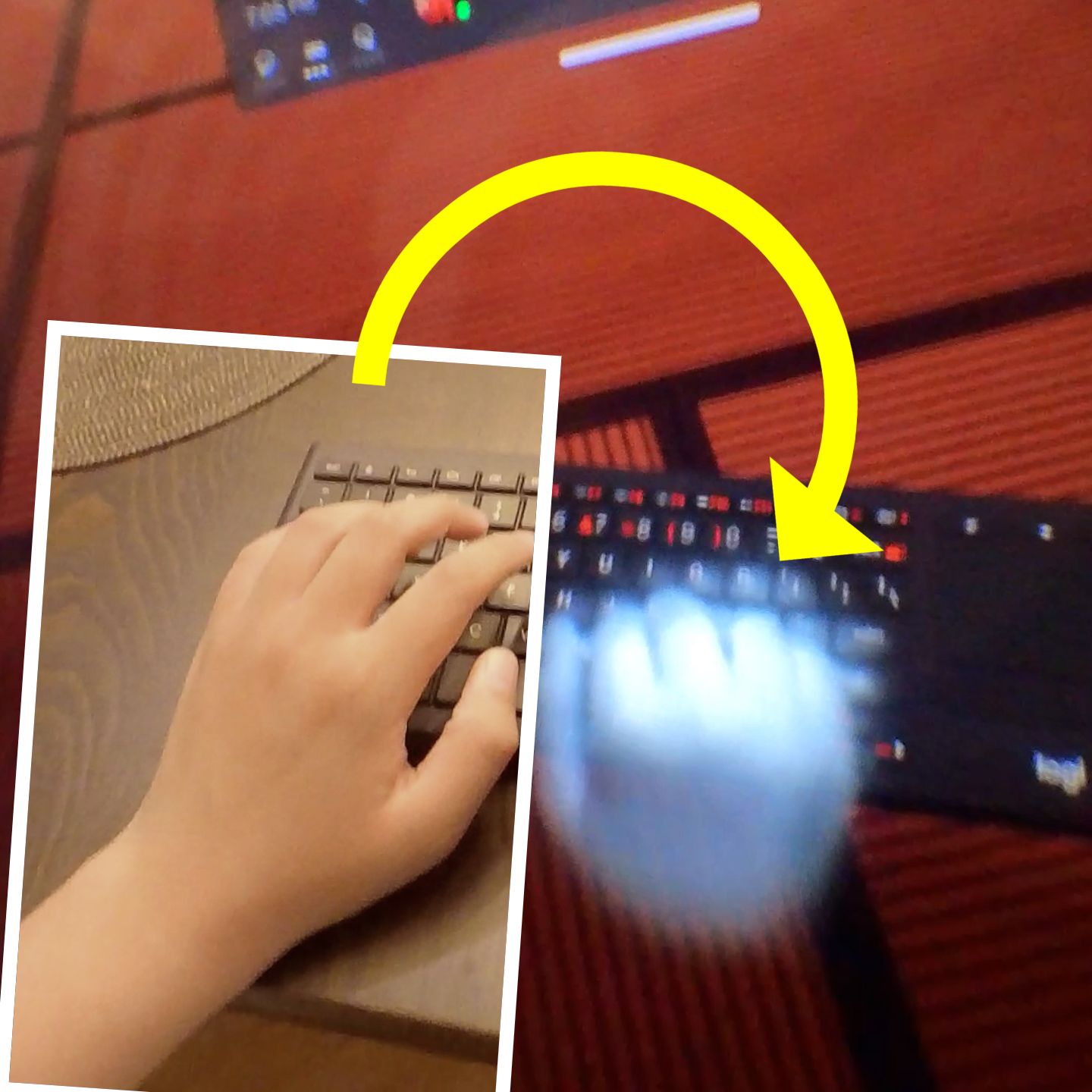 Working in VR with the FIRST virtual keyboard

Will your boss buy you a VR headset someday?  That seems far-fetched but it may be more likely than you think, as VR headsets are becoming practical as virtual monitors.  I got to try working in VR with the first VR keyboard and virtual monitors with Oculus Quest Infinite Office and it was a much better experience than I expected.  Here’s a hands-on report (no pun intended), which I actually wrote in VR.

Last week, Oculus announced the roll-out of Infinite Office, a suite of features designed to enable us to use VR headsets as virtual monitors.  It’s a simple concept — we would be able to have as many monitors as we could want in VR but it is a bit harder to execute than it may seem.

The display would have to be detailed enough that you could read small text easily.  You also wouldn’t want to lose your work.  You’d want the virtual monitors to be persistent as you move from place to place.  And although most of us are touch typists, it would help a lot to be able to see both they keyboard and the mouse, especially when we have to type a lot of symbols and numbers.

These are just some of the obstacles to using VR headsets as virtual monitors.  And to my surprise, most of these concerns were addressed adequately with Infinite Office, which I tried with Oculus Quest 2.

Virtual Monitors [Quest 2 and Quest 1].  I can create up to three widescreen virtual monitors that curve up to 180 degrees around me, and each monitor can hold any number of tabs within them.  And yes, I can read small text easily because of the size of the virtual monitors – even 6 point Times New Roman is easily legible to me on Quest 2 and on Quest 1, I can read 10 point font.

Persistence [Quest 2 and Quest 1]: The virtual monitors are also persistent on both Quest and Quest 2.  The browser windows will be kept as-is even after you restart your VR headset or if you move the headset to another area.

VR Keyboard [Quest 2 only].  If you use a Logitech K830 keyboard (around $80), you’ll be able to see a model of the keyboard in VR.  You’ll also see your hands whenever you type.  This makes it easier to type in VR, especially with symbols and numbers.

Logitech K830 is a keyboard that can also appear in VR

Web-based apps only (for now).  The virtual monitors only work in the browser app, which means Infinite Office is limited to web-based apps only for now. When I get access to Air Link, I’d like to see how easily I can use desktop apps such as Premiere.  With Virtual Desktop, the display was a little less detailed than I needed it to be.  Perhaps with Air Link, the display can be detailed enough that I can really use my VR headset for virtual monitors.

Scrolling up or down: scrolling with the Logitech K830 touchpad isn’t very accurate in VR.  It alternates between being unresponsive and scrolling too fast.  I would also prefer a mouse instead of a touchpad.  However, the Quest 2 can connect to a single Bluetooth device at a time.

Passthrough isn’t a substitute for AR yet.  In Oculus’ concept video for Infinite Office, they envisioned showing virtual monitors over a passthrough view of your environment, which looks similar to AR except that it has an unlimited field of view.  This may not be possible even for Quest 2.  First, the passthrough view is black and white.  This could be a hardware limitation (the cameras are black and white).  Second, when Passthrough virtual environment is activated, I can see the keyboard but I can’t see my hands over the keyboard.  Third, there’s a little bit of distortion at the edges.  So although passthrough works great for setting the Guardian boundary, it’s not a substitute for AR, at least for the Quest 2.  I expect that the next VR headset from Oculus would have a full color and possibly more detailed passthrough view.

No Virtual Desk.  Oculus also previously showed that you would be able to create a VR model for your desk, and put it in its corresponding place in VR.  However, I didn’t see this feature yet in Oculus Quest app version 28.  I expect that it will be like the keyboard and you’ll be able to see a passthrough view of objects on top of your desk.  (Otherwise, it would not be practical to simply have the desk appear in VR without being able to see objects on top of it).

Jumping around: occasionally, the cursor would jump around when Oculus Quest automatically switches to hand tracking by mistake.  Also, whenever I remove my hands from the keyboard, the page can suddenly scroll down to the bottom of the page.  The best workaround for this is to disable hand tracking while typing a long article but you won’t see your hands as you’re typing.

Browser out of date:   When using Google Docs, I keep getting a message that the Oculus Browser isn’t supported.  It does seem to work, but you just get a nagging popup screen every session.

Reconnecting is not automatic: The Logitech K830 doesn’t seem to reconnect to the Quest 2 automatically after the Quest 2 is turned off.  Instead, I have to pair it again with the Quest 2.

Overheating and limited battery:  The Oculus Quest battery can last only a couple of hours, and even if you connect your headset via USB, it can eventually overheat.

Limited options: I can’t change the keyboard layout.   On my desktop, I like to type in Dvorak, which is available on Windows, Mac and Chrome.  On Infinite Office, I can only type in QWERTY.

I’m hoping that most of these bugs can be fixed without significant problems.

Logitech K830 can be viewed in VR on Oculus Quest 2

How to pair Logitech K830 with Oculus Quest or Quest 2

You can use K830 with either Quest or Quest 2 but on Quest, the K830 will be invisible.   You don’t need to use the WiFi dongle that came with the K830. Instead, you only use Bluetooth. On your K830, type Fn and Del to activate bluetooth (it should flash green rapidly). On Quest, go to Settings… Experimental Features … Bluetooth Pairing… and click on Pair. Then look for K830. It will give you a 6 digit number that you have to type in your K830.

F1 – toggle the keyboard backlight.  I suggest leaving it at maximum to help the Quest track the keyboard.

F2 – go back to the previous page

Windows key or F8 – toggle the Oculus menu.  F7 seems to do the same thing, but sometimes doesn’t work.

CONCLUSION: Can you work in VR with Oculus Quest?

OK now that I’ve tried Infinite Office, I would say it can be useful to some people.  Obviously, I would prefer to have huge real-life monitors.  But if I don’t have the space or budget for it, and my only alternative is working on a small laptop, working in VR with Infinite Office is an attractive option as long as the apps I need are all web-based.  As for desktop-based apps, I’ll have to wait until Air Link becomes available before I can decide (I’ll update this page).