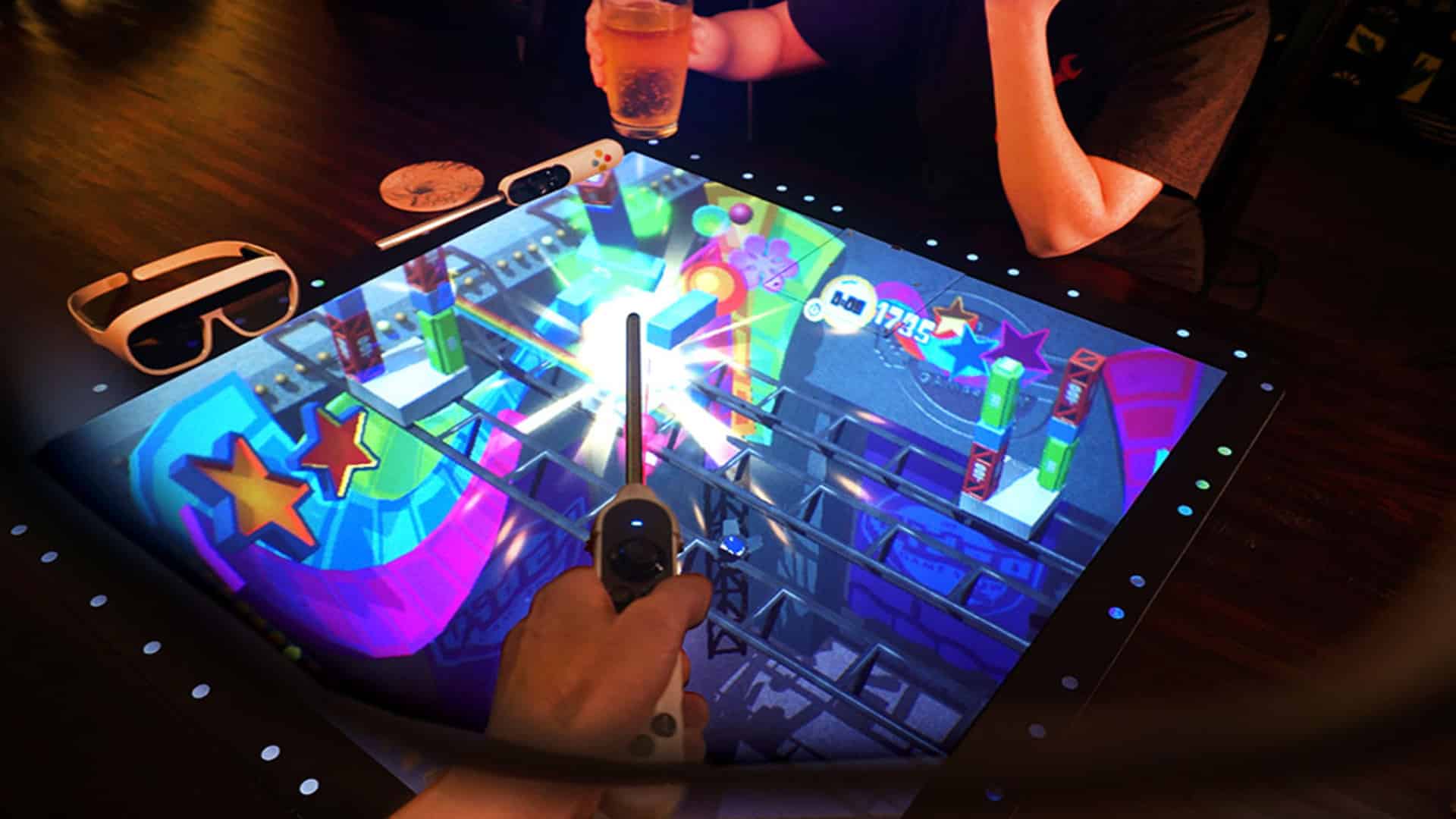 []Tilt Five is one of the most promising AR headsets available on the market right now.

[]Consumer AR headsets still have a long way to go. The industry is several years from solving key technical problems that complicate the path to lightweight and general purpose AR eyewear. Some of the biggest companies in tech – Meta, Google, Apple and Microsoft – are making progress, but they’ve yet to deliver a product available at a consumer level.

[]One much smaller company is taking a more specific approach, working within the constraints of current technology to deliver a compelling experience today.

[]Tilt Five is essentially a modern-day tabletop gaming kit, driven by a pair of glasses that employ a patented implementation of AR technology.

[]Over the last few years, there’s been a steady buzz building around Tilt Five, and for good reason. It provides an experience that feels far more encompassing and satisfying than you might expect from any AR in 2022. Even more impressive is the form factor – it’s a sturdy, lightweight and compact piece of AR eyewear.

[]There’s still major caveats to consider that limit Tilt Five’s appeal right now, but after hands-on time with the kit at Gamescom, we’re still convinced this is an important platform to keep an eye on.

The Magic of Tilt Five

[]The basic kits start at around $359, which includes one pair of glasses, the wand-like 6DoF controller and one of the company’s retroreflective boards (along with some minor accessories). A 3-pack of the glasses with a single game board is priced at $959. It’s the reflective board that’s key to the Tilt Five system, and the main reason for both its grand achievements and limitations.

[]Almost every other AR headset, such as Microsoft’s HoloLens 2 or Magic Leap 2, produces AR content by sending light directly through the lenses of the headset. Tilt Five works a little differently. It projects a near-imperceptible amount of light out of the headset and down onto the retroreflective tabletop board. This light is then reflected off the board directly back into the headset’s lenses, resulting in remarkably clear and immersive AR imagery that features an expansive field of view far beyond other AR systems we’ve seen. In fact, the field of view is comparable with most current consumer VR headsets.

[]Trying Tilt Five out for the first time almost feels like magic – to the naked eye and passing observers, the board looks completely blank. But to the person wearing the headset, the reflected light brings it to life. With such a large field of view, you get a true sense of immersion without losing any connection to the real world.

[]The system’s approach also means that objects, such as your hand, can appear to properly block the content on the board – the projected light is just enough to reflect off the board, but won’t show up against anything else. Experiences that show depth below the board look particularly impressive, making it seem like there’s a whole world sunken into the table on which it sits.

[]From a technology standpoint, it all adds up to produce a compelling version of AR that remains unmatched on a consumer level. However, the trade-off is Tilt Five’s constrained use cases – it’s a tabletop experience, for better and for worse.

[]Talking to others, everyone seems to have their own dream use case for the system — it’s flexible enough to take in several directions, and some users already have. Ellsworth spoke of one example where a dungeon master customized a tabletop roleplaying game so players with high perception would see upcoming hazards, like a poison cloud, visible on the board through their headset. Those with low perception wouldn’t see the danger — essentially encouraging players to communicate in the process.

[]It’s clear Tilt Five has huge creative potential, which is helped along by the modularity of the retroreflective board. The basic kits include a kickstand to raise part of the board up vertically – useful for experiences that demand more height – and you can combine multiple boards together to extend your play area. Some enterprising developers have hung the board on a wall to test out ideas like using it for holographic communications via a hanging portal.

[]All this said, the system still has some constraints and downsides worth considering, the biggest of which remains the additional requirement of a PC per headset to render the content. The Tilt Five headset requires a tethered connection to a PC to operate, which is a big ask – especially for multiplayer sessions with multiple headsets.

[]Progress is being made in that department though – Ellsworth tells UploadVR that multi-headset support, all connected to one PC, is in the works. Likewise, support for connecting to Android phones (and iPhones, later down the pipeline) is also being worked on, but using mobile platforms for rendering will limit the available content even further as developers contend with additional performance optimization needed to get software running on those devices. It’s worth keeping in mind, then, that Tilt Five is still very much a fledgling platform. It’s likely to be adopted by the earliest enthusiasts who understand they’re investing in something that, at this point, is much more akin to a developer kit than a fully realized consumer platform.

[]There’s also supply and shipping constraints to consider. After a very successful Kickstarter campaign, Ellsworth tells me they’ve almost finished shipping to all of their backers — two years later than originally planned. Anyone can place an order online for a Tilt Five kit at the moment, but it might be some time before it turns up at your door. Ellsworth says the goal is to bring this timeline down to be comparable with any other product – 1-2 weeks shipping – but it’s unclear when that will be possible.

Note that the Battle Planet imagery provided here by Tilt Five is illustrative of the general concept, but not completely representative of the through-the-lens experience. Tilt Five requires the reflective board behind the content to represent depth to the wearer, and this image shows content outside of that region. []Ellsworth ran through a bunch of demos and varied content during my hands-on, but it remains to be seen just how comprehensive the current content line-up is for headset owners. A particular highlight of the games I tried was twin-stick shooter Battle Planet – Judgement Day, pictured above. Developed by Threaks, it initially released for flatscreen devices but was recently ported over to Tilt Five.

[]Bringing existing flatscreen games over to the system will no doubt help buff the line-up out and the announcement of Catan coming in 2023 is another positive sign. It looks hopeful that other big players in the industry will take notice — we continue to dream of Demeo from Resolution Games on Tilt Five — and we hope to see more developers exploring this platform in the future. We’ll have to wait and see.

Ellsworth also spoke enthusiastically about new and upcoming features. One recent addition is MixCast support, which takes the stream from a mounted (and calibrated) webcam and accurately renders the AR content on top, as shown above. It’s a way to give those outside of the headset the ability to watch what’s going on in real time – perfect to display on a TV or a Twitch stream.

[]Tilt Five is an inherently different product to most other AR hardware available right now. Its current iteration may not share the same lofty aspirations as headsets developed by companies like Microsoft or Magic Leap, but Tilt Five’s current constraints also invite creativity. The bottom line? What you see through the lenses of Tilt Five is quite compelling right now.

[]Instead of aiming for the sky, Tilt Five aimed for your dining room table – and for the moment, that feels just right.