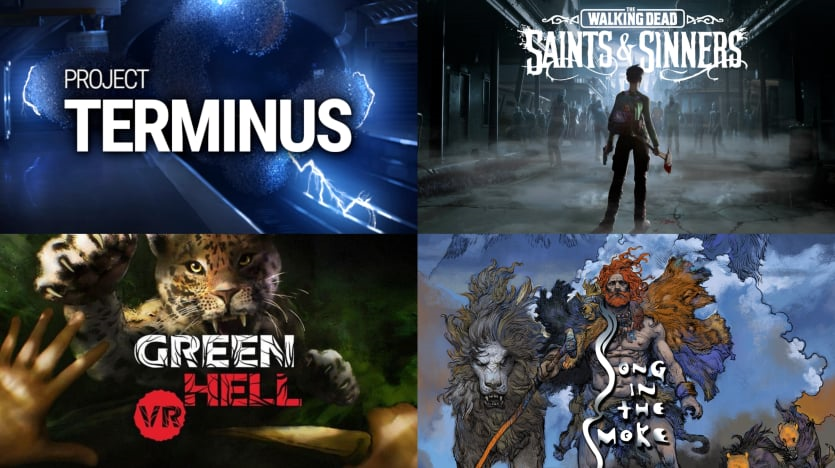 When you slip on a VR headset and the physical world melts away, you’re transported to a bold, new digital frontier. There’s a magical moment of mystery and anticipation that can’t really be replicated any other way. Virtual reality lets you feel what it’s like to be stranded in the forest scrounging for supplies, trapped on an alien-infested spaceship, or even abandoned in a zombie-infested apocalypse. It can be terrifying—but survival is your only option.

The survival genre taps into our primal sense of fear, and VR ups the ante, giving you new ways to live out that nightmare from the safety of your own home. Let’s call it disaster preparation, shall we?

Check out our full list of 11 amazing VR survival games to play on Meta Quest 2, and if you have any other suggestions, you can let us know on Twitter!

This one’s for the fans of spooky stuff. Cosmodread from White Door Games is a terrifying VR survival horror roguelike that sees you stranded on a dying autonomous spaceship. As you explore the harrowing hallways, you must scavenge for supplies to last long enough to reach the safety of Earth. On your journey home, you’ll search for supplies, fight off terrifying creatures, and explore a ship with a new procedurally-generated layout every time you die.

Hopefully the thought of being trapped underwater and slowly drowning doesn’t scare you too much because that’s exactly what FREEDIVER: Triton Down is all about. You’re plunged into the depths of a capsizing research ship and tasked with outmaneuvering the water’s lethal surge. Luckily, you’re a world-class diver, so you’re well-equipped to fight for your life at sea. Stay calm and think fast in this terrifying experience.

In Green Hell VR, developer Incuvo puts you in the shoes of Jake Higgins, a famous anthropologist, as you become stranded in depths of the Amazonian rain forest. Utilizing the interactive features of Quest 2, Green Hell VR will have you crafting the tools and weapons you’ll need to construct shelter, hunt animals, make food, and try to figure out how to survive. It’s a harrowing adventure that’s sure to keep your pulse up. How long do you think you can last?

Into the Radius from CM Games began life as an early access PC VR title and has now made its way all the way onto the Quest Platform for its final form. This open-world single-player survival shooter features authentic guns to load and use in your arsenal as well as small immersive details like an interactive map, the need to take cover, and a mysterious world ripe for exploration.

In Project TERMINUS VR from developer CVR, you must keep your wits about you as you descend into an unforgiving post-apocalyptic version of Paris that’s overrun by dangerous nanobots. The rampaging nanobots have taken over and reanimated human corpses, so you must ration your supplies and find answers as you experience the suffocating terror of an ending world. And to make things even more fun, Project TERMINUS VR is fully playable in co-op including cross-buy and cross-play between Quest and Rift versions.

Song in the Smoke

Song in the Smoke from 17-BIT is a survival experience like no other. The unique visual style and attention to detail make it feel like you’ve entered a living, breathing illustration to evoke its powerful story and sense of place. You’ll have to use your senses to identify threats around you as you experience the true fear and isolation of being alone in nature.

One of the world’s most iconic properties came to VR with a bang when The Walking Dead: Saints & Sinners from Skydance Interactive first released. Featuring some of the best visuals, amazing world-building, and visceral gameplay available in VR, this is a gritty and dark adventure that’s not for the faint of heart.

The fun doesn’t have to stop there, though. We’ve got four more survival games to recommend as well, but you will need a capable gaming PC in order to play these gems in VR. Since none of these games are natively available on the Quest Platform, you’ll need to use a compatible PC VR headset or connect your Quest via Oculus Link with a USB cord or wirelessly using Air Link to try them for yourself.

If you want more jungle-themed survival, check out The Forest VR. If you’re into something with more of a sci-fi spin, you can’t go wrong with The Solus Project. If you want to mow down zombies with friends, then definitely look into SURV1V3. And iif surviving in the depths of the deep, blue ocean is more your speed, then Subnauticahas got you covered.

There are tons of amazing VR survival games out there. If you want to recommend something we missed, feel free to reach out over on Twitter.