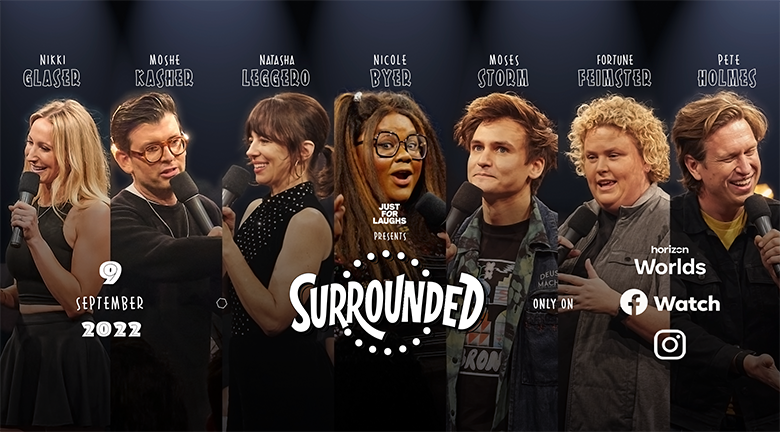 Filmed in July 2022 at the Just For Laughs festival in Montréal, Surrounded is set in the round—a simple yet effective format where the audience inspires the jokes. VR attendees can mix and mingle with friends and fellow comedy fans. No headset? No problem. You can also watch the event in 2D on the Just For Laughs Facebook or Instagram accounts or via Messenger’s Watch Together feature.

And whether you miss the special’s premiere or just want to relive it, we’ll have on-demand replays available in Venues in Horizon Worlds and on Oculus TV.

But that’s not all. We also partnered with Just For Laughs to bring their internationally acclaimed discovery showcase New Faces to VR. Over the years, the showcase has brought a host of world-class comedy stars into the spotlight, from Kevin Hart and Jo Koy to Amy Schumer and Kumail Nanjiani. The five-part Just For Laughs New Faces Comedy Showcase will air weekly in Horizon Worlds beginning October 4, introducing nearly 50 up-and-coming standups to the Horizon Worlds community.

Tune in to Surrounded September 9 at 6:00 pm PT. From Horizon Worlds, travel to the Venues district. Once there, look for the Surrounded marquee. You can also search for the event from the Horizon Worlds main menu. Create your Meta account to RSVP and attend the event.

*Horizon Worlds is available to people 18+ in the US, Canada, the UK, Iceland, Ireland, France, and Spain.